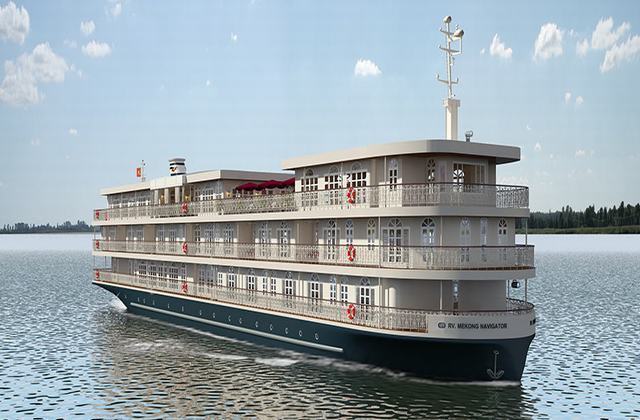 Early morning arrival at Saigon Meeting Point. Your guides greet you and our porters collect your luggage for delivery to your suite. Board our air-conditioned bus for the scenic 1.5-hour countryside ride to My Tho where we meet the Ship.
Welcome to the laid back luxury of the Mekong Navigator Cruise. Settle into your elegantly appointed, river facing suite as the vessel begins to cruise and thus begins one of life’s most memorable and photogenic adventures. Ascend to the Observation Deck if you wish, to take in the view of the swaying palms and bustling waterways of My Tho.
Over the next seven days, the Mekong sails from here along the one of the world’s great rivers, the Mekong, towards remote natural and cultural destinations visited by only a few. First however, we will begin with a Safety Drill followed by a briefing on the Observation Deck in the air-conditioned Indoor Lounge with the cruise director and hear from our expert guides about your Mekong adventures ahead.
We start by going native, so to speak. People of the Mekong Delta rely on flat-bottom wooden boats called sampan to get around and transport goods to market. We climb aboard to paddle through Cai Be floating market, where more than 400 sampans gather every day, starting in earnest from 5 a.m.. Each boat has one bamboo stick on the front to display that vendor’s product, be it Vietnamese fish sauce, rice paper for dumplings, or colorful sweet confectionery. We continue our exploration of this area on foot or by bicycle for more up close glimpses of the daily life of Mekong Delta dwellers.

Though we are in the heart of Vietnam, French colonial architecture stands all around us today as we walk back in time with a tour on foot around Sa Dec town. We roam around the fresh produce and exotic spices on sale at the local market and make our way to the colonial house once occupied by French writer Marguerite Duras. The house, built in late 19th century, is interesting in itself as a harmonious combination of Western and traditional Vietnamese architectural styles.
Perhaps no one has done more to associate themselves with the Mekong Delta than Duras. Born in Gia-Dinh, as Saigon was formerly known, because her parents had responded to a campaign by the French government encouraging people to work in the colony, Duras’ early life here in Sac Dec was one of extreme hardship. Her father fell ill soon after the family arrived here and returned to France where he died shortly thereafter. Her mother remained in Indochina with Marguerite and her two siblings, eking out a meager living as a schoolteacher. It was here in Sa Dec that the teenaged Duras and Huynh Thuy Le, a rich Sa Dec merchant began their affair that Duras wrote about in her most famous work The Lover.
Our time travel continues after lunch on board the RV Mekong Navigator. We cruise by skiff to a 40 square kilometer riverine island called Gieng Islet, to walk or cycle around this peaceful religious enclave on the Mekong Delta. Together we visit Cu Lao Gieng Church, built in 1875 with materials imported from France. It is impossible not to admire its imposing bell tower that appears to pierce the sky high above its low-rise neighbors. At the Convent of the Providence Order and Catholic Church, interact with Sisters or Father to learn of the religious influences on the surrounding communities, which we may visit to admire the indigenous pagodas and wooden houses built in the early twentieth century in traditional Vietnamese design and shaded by bonsai trees, as was the local custom.

Have breakfast onboard, then cruise upstream river to Chau Doc,
.After visiting the main town of Chau Doc and the colorful Tay An Pagoda, we’ll continue by sampan to visit a local family’s fish farm, where we’ll learn about various types of fish being caught and farm-raised in this region as well as the importance of this industry to Vietnam’s economy. In the afternoon, After clearing formalities and crossing the border, witness the fascinating change in the architecture along the riverfront as we travel into Cambodia.

After breakfast on board this morning, enjoy a ride in a cyclo, one of the symbols of Phnom Penh. In one of these three-wheeled bicycles, with the driver perched on high above the rear wheel and your bucket seat slung between the two front wheels, you will be gently driven along the riverfront to the Royal Palace complex, where you can get out to enjoy a leisurely walk through the grounds. View the Throne Hall and Moonlight Pavilion before visiting the famous Silver Pagoda, named for the 5,000 silver tiles which cover its floor. Here we will also see the Emerald Buddha and the Maitreya Buddha, encrusted with more than 9,000 diamonds. We’ll get back in our cyclos for the short ride to the National Museum, housing many of the artifacts excavated at Angkor Wat.

This afternoon enjoy some time at leisure to do some shopping or sample one of the wonderful restaurants or pubs along the picturesque park-lined riverfront overlooking the chaktomuk - the confluence of the Tonle Sap, Mekong and Bassac Rivers. Before dinner, local children will give a dance performance on the ship’s Sun Deck. Cambodia has a long and rich tradition of classical dance, including the graceful and ornate Apsara Dance, which the children will perform in addition to traditional folk dances.

This morning we will learn more about the darkest days of Cambodian history with a visit to the Choeung Ek Memorial. Prior to 1975, Choeung Ek was an orchard and a Chinese cemetery, but during the Khmer Rouge regime the area became one of the infamous killing fields and the site of the brutal executions of more than 17,000 men, women and children. Today, Choeung Ek is a memorial, marked by a Buddhist stupa with acrylic glass sides, filled with more than 5,000 human skulls. Most of the victims here had first suffered through interrogation, torture and deprivation in the S-21 Prison (now the Toul Sleng Genocide Museum), which we will visit on our way back to the ship.

Back on board, we’ll set sail this evening for the border of Cambodia & Vietnam while we enjoy a scrumptious dinner in LeMarche dining room followed by a relaxing evening on the river.

A full day of sailing up the scenic Tonle Sap River offers a rare chance to witness rural river life in Cambodia. After lunch, board a private excursion boat for a panoramic cruise of the floating villages at Kampong Chhnang, where friendly locals are busy working, selling, and shopping on the river. When we return to the ship and set sail, stay on deck to watch the beautiful sunset and crowds of local children on the riverbanks bidding us farewell as we continue our journey down the Mekong to Kampong Cham.

This morning we’ll visit a local secondary school which serves several of the surrounding districts. Following a tour and an informative Q&A session with the principal and students, we’ll walk up the hill to the Wat Hanchey, an ancient hilltop pagoda dating from the 8th century, to receive a traditional Buddhist Water Blessing from the monastery’s resident monks. After enjoying a walk around the monastery and the amazing views of the Mekong River valley, we’ll return to the ship for lunch.

In the afternoon, we’ll drive through the city of Kampong Cham to visit Phnom Pros (man hill) and Phnom Srei (woman hill) and view the 10-meter long reclining Buddha and the 13-meter tall preaching Buddha. We’ll also view the beautiful Stupa, a traditional Buddhist commemorative monument usually housing sacred relics associated with the Buddha or other saintly persons. According to stupa.org: “The shape of the stupa represents the Buddha, crowned and sitting in meditation posture on a lion throne. His crown is the top of the spire; his head is the square at the spire's base; his body is the vase shape; his legs are the four steps of the lower terrace; and the base is his throne."

Today’s final visit is to the 12th century, Angkorian-period complex of Wat Nokor Bachey, built in the middle of the 11th century, during the reign of Suryavarman II. In addition to being the largest ancient temple complex in Kampong Cham Province, the black sandstone from which it is built distinguishes it from other temples of the period, which are often built of brick or reddish sandstone. There is even an inscription which is still open to visitors to see (and touch) in the temple's central pavilion. Later, we’ll return to the ship to relax as we begin sailing down the Mekong.

Following breakfast aboard ship, we’ll disembark and transfer to our final destination 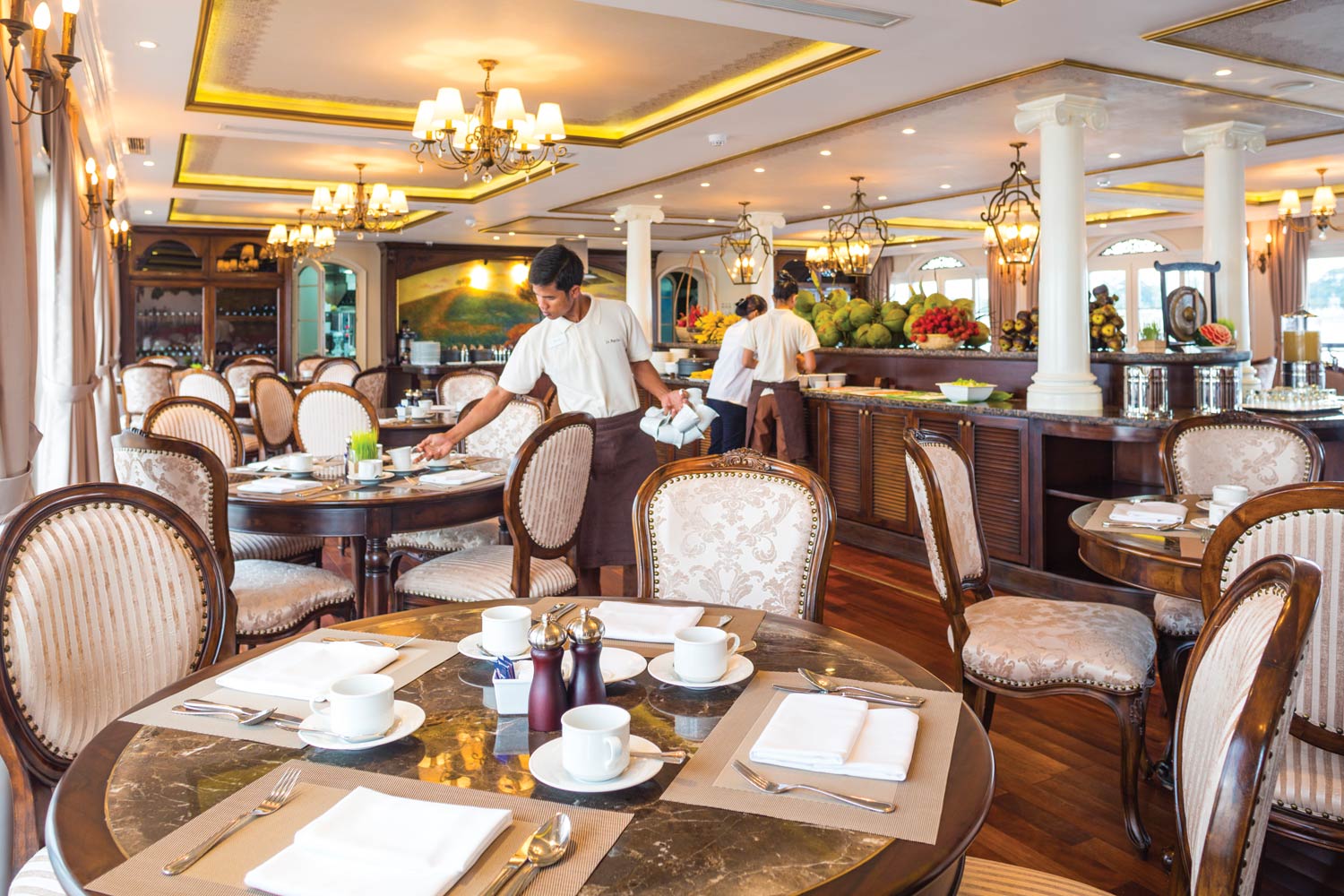 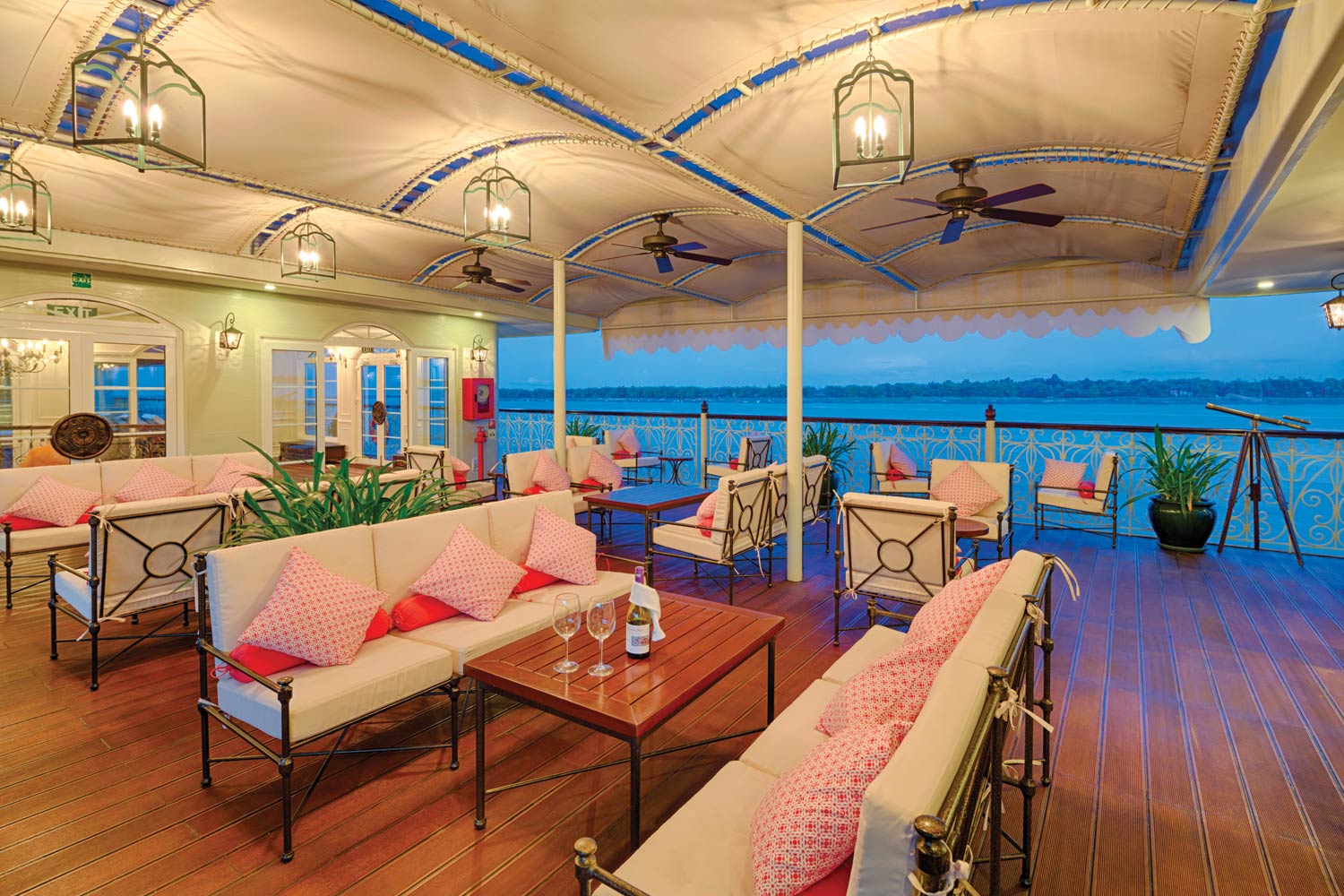 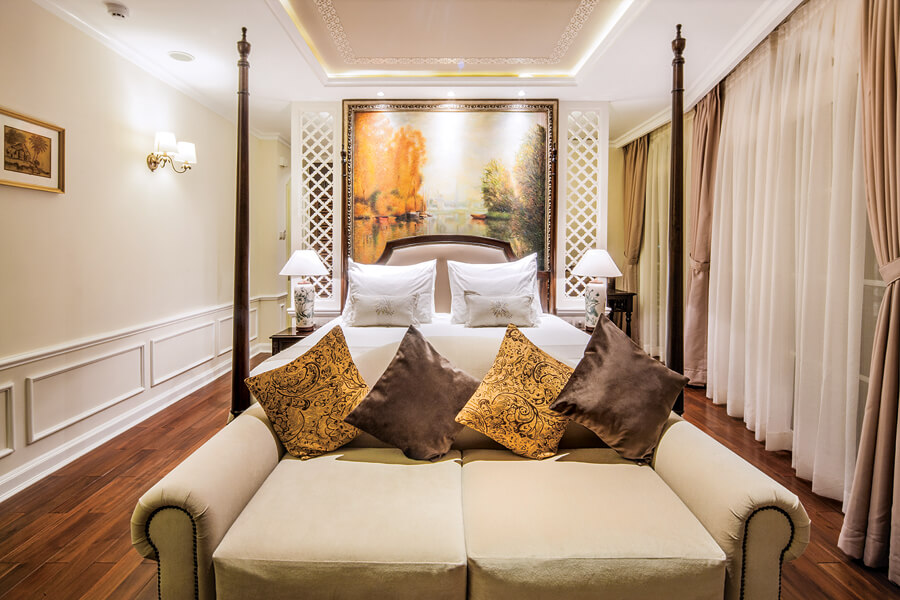 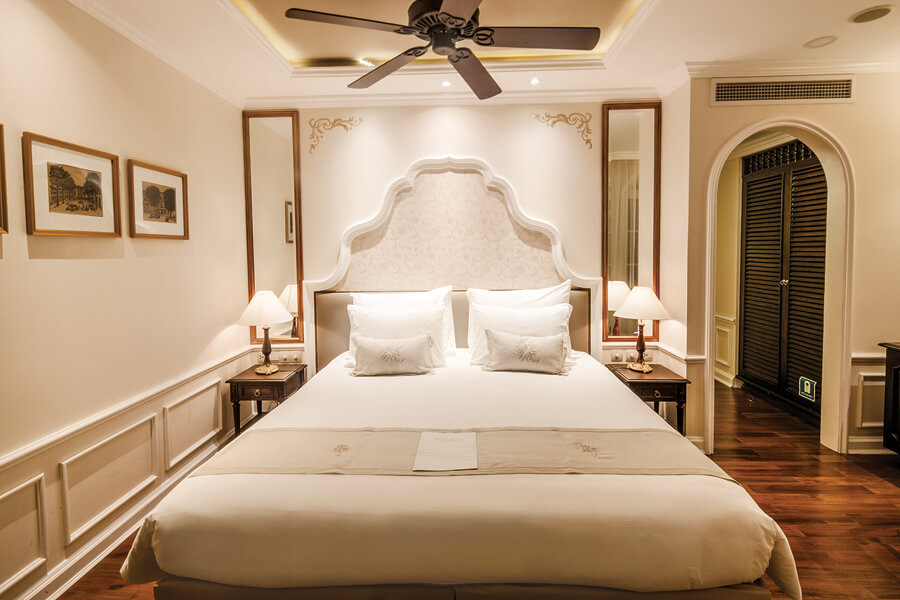 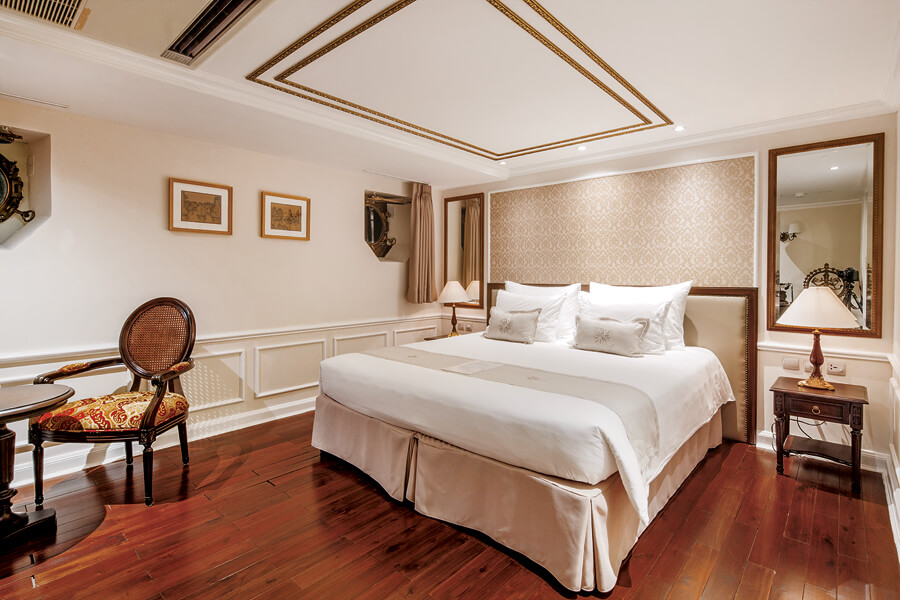 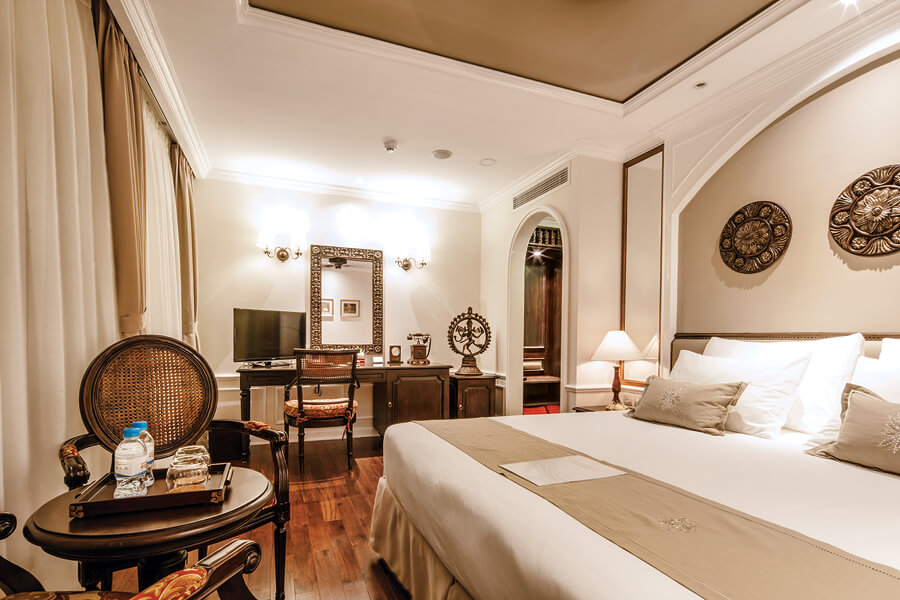